The Stand-In (PERK) - The Actor of this Character will stop a scene where another Character could be seriously affected and dress up like him or her to act out a dangerous action. The "standing in" Character will absorb any Damage or suffer any sort of NERVE effects from the action, also no Fame will awarded. No fame is awarded because the camera can never show the main Character's fame during that sequence.
(Inspired by Beckett Warren) 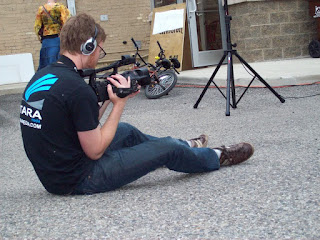 The Camera Gag - Once in a game when, before the Climax, an action in the scene is important, the Director (the GM) will stop things. Apparently the camera man has stepped away, a Character not involved with the action going on will have to jump in to film the shot. Now the actor(s) in front of the camera as well as the actress behind the camera will have to make successful Draws. If both sides do, everyone gets a FAME Card and there is at least one kewl scene in the flik. If anyone drawing fails, then only the successful Character gets a FAME Card.
Posted by Tom K. at 2:34 AM 3 comments:

GENCON 16: New Places Of the Mind


Despite efforts by our PeryPubber clique's "Quitter Club" to bring things to halt over the winter, we did it. Kal, Beckett, Jedi Bacon, Saharrah (Sarah), Jess (Kashi), and Caed Phaser all pulled it together and came up with a way to get to stay downtown at the most massive tabletop gaming convention in existence. We also were able to have fun and make the hard work that we had to do a lot of fun.

The LARPS of Dread
We ran five LARP sessions designed for forty people to attend, complete with two mini-scenarios to compliment two of them. Caed had talked me doing some LARPS anyway some fourteen months earlier. My Crawlspace games always turns into some live action by the end of the second act anyway, so why not? The attendance was from nine to just over 30 people (a rough average of 50% planned attendance), but that worked out better in the end.

The Rat-Pack Versus Cthulhu sessions were a gas. "Cthulhu at the Sands," "The Search for Dino," and "the Sword of Sammy" brought in the hardcore LARPers. We as GMs often got to sit back and eat popcorn, or in my case buy drinks, and watch the action. Once in a while I'd insist on injecting scene breaks and closures, often to the dismay of of the folks around me. Kal really shined as a GM/GPC (guided character?) when he took on the role of a Rat-Pack member for all three of them. Kashi mustered up her courage and insisted on playing the role of Lilith for "The Sword of Sammy" scenario that she'd been working on for weeks already. She did great. 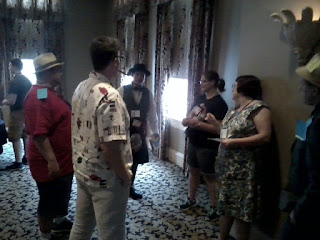 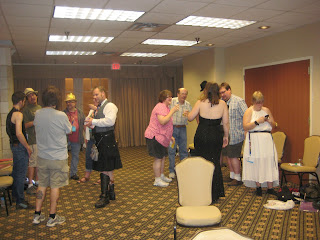 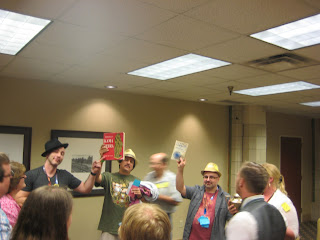 The zombie apocalypse scenarios "Outbreak" & "Extraction," including the sequels "Patient Zero" and 'After Action Review," pulled in more RPG players and a smattering of LARPers. Attendance of course was a bit more than the Rat-Pack events as well. All this increased the level of difficulty for the us, but we waded through.

I swear my co-GMs, especially Sarah and Beckett (and Caed jumping in where she could) were working against my plot the entire time. I was running around wondering 'where are my zombies?'. On Saturday when I got my zombies, I got vegetarian zombies that negotiated a peace deal with the zombie-kill squad sent in by the "Extraction" scenario. After a ten minute panic session, I had to start laughing. 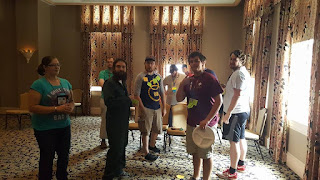 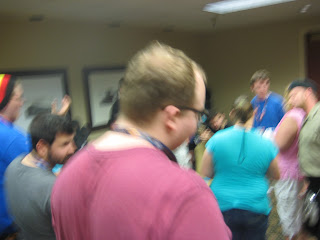 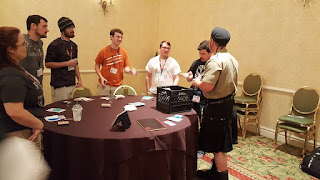 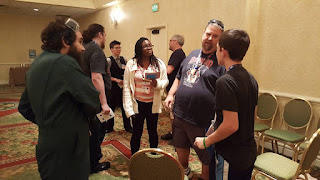 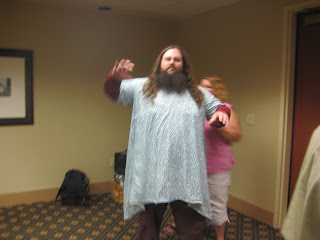 There was a convention to go to as well 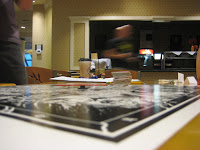 Most of my free time was spent either really getting along with or arguing with bartenders at Crowne Plaza or Union Station. I did get out a bit on Saturday night. I went to a DCC session where the point of the gig was to interrupt GMs running role-playing scenarios to groups actively participating by adding a gaggle of reluctant role-players from other tables. Once this didn't go well, the original GM was replaced with a very loud GM that's mission was to hammer down anybody that was role-playing and assist the players that had enough sense to be quiet to remain under the radar for the rest of the course of play. Later I heard that I was among the winners. My unimpressive PC with a role that I didn't ask for, was killed and replaced by a skull-headed robot, which had no incentive to do much of anything but not breath. The atmosphere was ripped away from the planet and only the skull-sucks remained. Hurray?

Still there were parties to be had and gamer people to hang with, so I took it upon myself to accept three earlier invitations and a couple of dances and drinks. Free libation, beautiful men and women to hug, I struggled through it. I am rather giving like that. I especially had to check out the "Changeling Kids,"  my own name for them, Katie, Casey, Andrew, and Michael from Chicago who showed me how to really do a LARP-- kidding aside, I got a lot of good tips from these peope.  By the way, Mike had a really great quote which I wrote down and wanted to post, but I can't find it right now. I'll post it later. One day I might tell you of Beckett's very quiet Fear and Loathing in GENCON experience. 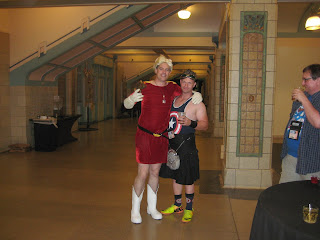 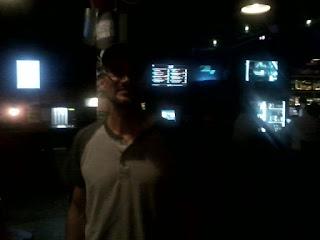 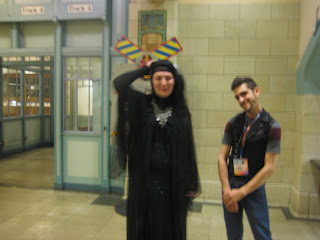 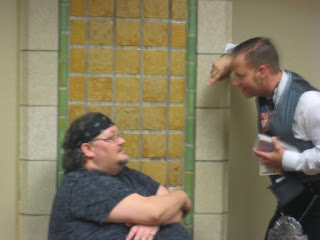 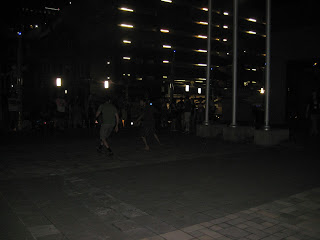 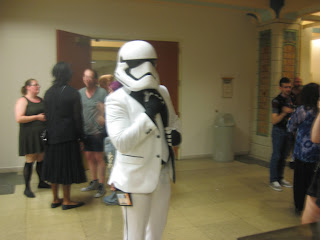 When Sunday am came, I had only one player show up for my Glow "Robot Jazz" session so I bought his ticket and we talked for about thirty minutes about indie gaming. I hope to attend one of Scott Favre's scenarios next year. I turned in the last envelope for the last event I had. I walked to my car, parked right by Acapulco Joe's, so some enchiladas and beer for breakfast made sense. With that I bid adieu to the Circle City, but not before my host Batman (Jordan) called to see if I could loan his youngest my now long forgotten behind badge-- close friends of both of us will understand the hilarity of this. 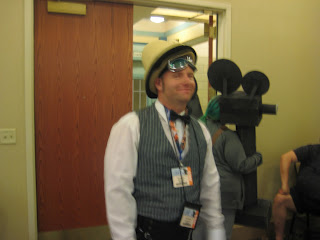