Actually it should be the Wobbleship, and it was first called the Wobble Machine. It's been more about the folks and not the vessel. It started out with the introductory scenario for WHAP!, a set of rules written mostly to make rules for adventures being written by Mike Larsen for my game, SPACERS(TM), which was not designed to used for "steam-punk high adventure" as he called it. I couldn't get WHAP down to one specific time period of technology, and I couldn't get straight steam punk because it'd require being overly specific in the rules. I just wasn't feeling that. So I went with a broad timeline of actual history, at least according to wikipedia, and play sessions would pop up from then and when they would.

I, as a player, got to go from 19th Century New York to far eastern Russia in Mike's steam punk games. I explored the Congo between the World Wars. Ken St Andre popped in with dinosaurs popping up in the middle of a dime Western. Then in 2012, Robin, would have the Wobble Machine, from "The Wobble Machine" scenario, show up and take me as a player to her Qalidar, which is beyond space and time, I think, with "Any Port In a Storm." The dimension traveling vehicle had grown from its bus-sized interior into a full barque complete with its original pyramid-headed crew, but much trippier in their own design as well. 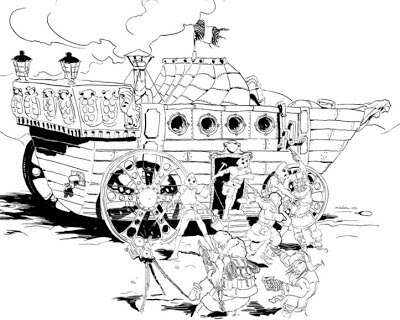 It is from here, where Wobble comes from. "Wobble" is going to be my space and time traveling role-playing pieces. It is where my players' characters will bump into strange and alien worlds. Not in a rocket ship or walking around with a sword and shield. Well, thinking about it, even if they are in space or are carrying medieval equipment. Other folk's space and time traveling works will be bumped into as well. I want to explore the games of Qalidar: Resistance and The Time Shredders. There will also be plenty of my own pretty abundant, if prosaic, creations as well.

Parts of the backgrounds will be posted here. Stay tuned.
Posted by Tom K. at 6:55 PM No comments:

Over at my other blog I wrote about when I lost my pre-generated characters for my midnight games of Call of Cthulhu at GenCon last summer. Well, the improvising that I did to get the players to develop characters in about 25 minutes did a couple of things for me. It helped me boil down the parts of the BRP system that I liked, and inspired me to turn more than a bit of it on it's head. It also gave me some deeper insight into how the genre of horror works for me as a GM.

It's been a Winter and Spring of renewed discovery for me. While I have been still working on T&T scenarios for my Kopfy's Swamp of Doom, and gathering others work not just for an upcoming issue of Elder Tunnels, my true efforts have been elsewhere. This has been for a few reasons. With the soon-to-be-released Deluxe T&T just around the corner, it kind of makes working hard on new 7plus scenarios seem pointless. I've liked every edition better than the last one when it comes to that system, so I am not ready to join the "retro-guard" of game writers writing for that special publishing release from yester-year just yet. At the table-top itself, I find my d6 games that aren't T&T get better responses than when I use a d10 percentile system, so this has developed into something. And thanks to some play-by-post sessions over the years, I have a pretty nifty playing-card based rule system worked out.

In case you haven't noticed, I write rule systems to help me from having to look up rules. So combining T&T and BRP concepts. I've developed TROTT. No longer "Tom's Rip-Off of T&T" (TAG) but now Tom's Really Outstanding Table-Topping. The rule are being adopted it to my Spacers game. This is being worked on as we speak and I am hoping to have it completed sometime in August. In the final phase of production is Glow, a rules set for a post-apocalyptic setting that I have running on-line over the last 18 months or so for groups here and there. This project should be out in early July.

At the end of May, the Dark Gathering took place. Our little, well largest ever actually, gaming Hoot, focuses on horror. As you all know, everyone at a Hoot is a potential GM, though once you get over a handful of attendees, not everyone gets to GM something but that's something for a different time. So I had to step up my game as a GM. The puzzle of how to get players to invest in their Characters that do carry on from one scenario to the next without becoming superheroes or good monsters, was what I set my mind to. And using humor and surreality in its writing I re-envisioned Crawlspace, into what is now Crawlspace 13.

The results on the table was some of the best horror sessions I have seen. The players who love horror scenarios liked it enough to shower praise on it and more importantly play in more sessions and run their own. I also had to avoid a lot of paperwork for the players because they are used to one-shot pre-generated characters and quick mechanic resolution over too much detail. so with that in mind, I formalized a system of using playing cards instead of numbers. This is now Tom's Action Card Kit, or T.A.C.K.. Adventures in TACK are called "Yarns," so I've gone T.A.C.K.Y.  more than once this last season. This system is days away from final release.

Part of the discovery of the last many months has been rediscovering Robin's, err Peryton's Qalidar and stumbling upon Brandon G. Osario's The Time Shredders. There is something refreshing and fun for me with time/dimension traveling role-playing. But I am a scenario writer more than a player, so I intend on writing for both of these systems. Of course, I have to come up with my own creatures and major personas so I'll be posting them here, as I won't be going out of my way to develop my own system for this genre, err sub-genre.

Well, that's the explanation for the re-purposing of the Many-Headed Troll. Now back to work for me.
Posted by Tom K. at 9:36 AM 6 comments: