It's All Fun and Games

While I might say that I've been busier playing, not just running games, of late to be broadcasting my activities to the world, it's not exactly true.

I have been a lot more open to playing in other people's games as oppose to insisting on looking for groups to run for. I've sat in on others games at BASHCon as well as elsewhere (a D&D one, I don't want to talk about it). JerryTel has been running a Weird Western series, that has been more than enjoyable. Peryton has been running an ICONS campaign for a couple years now, and while I have been the "troubled attendee," I have been consistent enough to help shape the world through my characters' actions. I've started playing with Beckett in his Dungeon Crawl Classics "Under A Broken Moon" (post-holocaust) sessions as well, and I think my "hermit" character has hit his groove, as opposed to the other three that I have had to play. 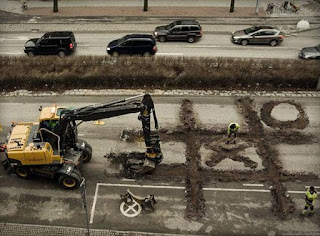 It still hasn't been a case of "playing instead of writing" though.

I am writing godshead-dammit almost every day off that I have, and often sketching out details on scrap paper while at the job. The LARPs for GenCon is taking up most of my time. I am alternately working between Spacers (TM) finish and the ever-distracting "Wobble" rough. And there are my own superhero stories for ICONS mini-series, namely "Flight of the Wise Owl, " where I've been keeping my GM chops in practice.

The influence of the other GMs, Robin and Beckett, has been very beneficial for me. This is both in new techniques as well as motivation with the highway building that my writing tasks have become.

Peryton did an epilog to the finish of her two year-long campaign, introducing me to the cut away for a tabletop session. Screw epilogues, or even prologues for that matter, I've started thinking of cut-aways for the assembled group in front of me at least two or three times a session. Sure it doesn't hide much from the PCs and it's very TV like, but I get a chance to show my off how developed my NPCs are. I really do get show bits of their personalities before a superhero's punch ever happens. This might be a cheap trick, but as of right now, I am in love with it.

In what I have confirmed is somewhere in the northern hemisphere, probably around Seattle, Beckett's post-apocalyptic world is teaching me a bit about rule usage in gaming. To me it seems that he is in love with the DCC game system and likes the players to build most of the session around the shared experience of what their characters are looking for. While I have found the dramatic plot shifts awesome, I find that the long-time players react with keen interest into trying out things if only to try new rules. I've known this for a while, but seeing this group in action is inspiring to get some more crunchiness into my own games. 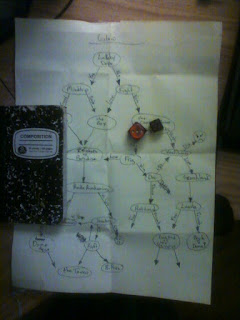 Oops. Still have to get the ducks in order for Origins. It's only three weeks away.
Posted by Tom K. at 4:42 PM No comments: