For my B-day, I bought myself four RPG products. Two RPGs and two sourcebooks indulging in adventure gaming passions Sci-Fi and Horror. Of course my bank account didn't need the hit and my book shelves have been overflowing for over three decades so this present is as decadent as a trip a Greek island. Still there is some joy in sitting back over a couple of evenings with my reading glasses on and reading through works written for the crowd that has role-playing in mind. Ah the fantasy-trip. As a guy writing his ultimate sci-fi/space opera RPG, I have to read all other SF games in existence. Of course the various Star Trek iterations are on the top of the list of what gets read. My first indulgence on the couch of yellow light and warming cats, was the latest RPG by Modiphius, Star Trek Adventures: The Roleplaying Game. 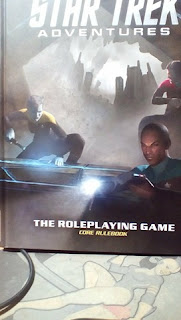 Well, looking at the cover, I see the darker disaster-driven tone of the Star Trek reboots (the ones w/ Chris Pine and incomprehensible space battle scenes) movie-- is that blown up London in the background? And I think Tuvok is leading a mission into somebody's tool shed on Smoggy-IV while an Andorian engineer struggles to get into a footlocker with a hapless red-shirt looking on dramatically. The overall product is as big as encyclopedia, heavy hardcover bound, and the pages are so glossy that paper cuts are not hard to come by. I know that this stands for quality (or rather "bang of the buck") in the Kickstarter era, but I begin to identify with our antenna-having heroine on the opening illustration.

I spent about an hour of the three hours reading it from cover to cover, looking at the inside of the covers. These are filled with star maps of what I think is Alpha and Beta quadrants of the franchises' universe. I never paid enough attention when watching the shows to hear if the writers identified real stars as many homeworlds for this or that alien species, so this was like a box of chocolates to me.

Turning through the sharp pages it read quickly. The historical sections strung together the franchises' sometimes at odds milieu. Enterprise, the grossly incoherent original series, the meandering Next Generation, and then about the second season of Deep Space Nine are woven together. The events of the Voyager's beginning and the Gamma quadrant are mentioned but not delved into. This history is more ascertained from atmospheric quotes of characters from the differing cultures referring to events from the various series and the movies. The writers want the gaming experience to occur using their mechanics and products. Long descriptions on point allocation, how dice effect things and how players should view their Star Fleet careers fill many, many pages. Pointers for the GM get thrown in here and there, and later a full section for the GM adds more to details already given. Meanwhile only the more TV photogenic of alien species of the UFP are bothered to be profiled. Later, some ships are discussed and then adversarial aliens and their ships get some coverage. And I was ready to play a game or two set in DS9 with maybe a time travel episode going back to STtOS.

The book and the writing has a lot of good things going for it especially when compared to other Trek RPG projects before it. There is high quality artwork, no pictures from the series, like an earlier effort. The ships and technobable (Treknobabble) are easily understood. The writers mention the Gorn but did not try to fill the Klingon and Romulan empires with animal-people and the Kzinti from Larry Niven's writings like say works that rhyme with Starfleet Battles (and its spin-off Prime Directive). It keeps itself from getting bogged down in details that never appeared or were even mentioned in the shows like FASA's RPG did way back in the day.

At the same time, as space role-playing games go, I wanted more to the universe if I had to deal with such a big book. Overall a Bigfoot of a sci-fi RPG.
Posted by Tom K. at 4:46 AM No comments: