The Glow That Grows Along the Horizon

Today, eight pages of basically rewriting took place. It was only after the seventh completed page that I bothered to look at the original write-up. And while I am sure that I need some seriously editing, I enjoyed the voice that settled itself into my fingertips as they skipped and stumbled over the keyboard. Once I came to end of the flowing prose and re-phrased rules-speak, I was changing the matrix from a d10 system to a variant of the d6 system that I know and love so, I decided to check out what was written before. Luckily it wasn't same.

The cadence and imagery had changed, making my hard wrought material from days of yore, at least half a year, read choppy and nervous. The rules themselves were better put, placed into sentences that were succinct and clear. That is, at least to my mind's eye, though I doubt my tortured editor will agree. Not that this experience is new to me. I grew up in the age of legal pads, typewriters, and photocopying machines. At the age of eight I was crafting works in a mixture of German and English from scores of pencils, each one named after new characters that I saw on American TV, to folded into pamphlets and read by the illuminated adults around me-- no kids allowed! Except the ones with cash in hand.  By My Hund And Other Pets That Bite was my first big hit, it sold about six dollars in one weekend. I think I bought my first issue of Kamandi with the profits. So my writing made sense sometime between Mark Twain and Julian Assange.

Minutia aside, what came next was even more heartening. When I looked at the stuff which I had already written, which had been already edited earlier, I had about 30 pages more of material that I need to add to the work that was in front of me. It occurred to me that before now, I've never had so much back material waiting to added to projects awaiting publication. And this one while being being re-fabricated has not been its own centerpiece. That means it was conceived as background for a scenario, and now is being worked on as a whole setting.

The setting is Glow, and I am finally getting my take on the post-apocalyptic world in order. How many years ago did I start this process? At least two before I started talking about it publically.

The Baker's Dozen Of Pages

So far this year, for some reason I mark years from 1.November until 31.October, I have had the good fortune of being able to spit out a 12-18 page yarn every seven days or so the last six weeks or so. Now it takes me a little longer than get the pieces out for public perusal, you know like editing and illustrations. Maybe a map here and there, naw screw those GM crutches. Okay maybe one or two maps.

I am so loving life. My 'Castle of the Moth' campaign, started some 5 years ago at Carnage Convention, is coming out as scenarios for Crawlspace 13. Kopfy's Swamp of Doom for T&T is going to finishing up here. And notes for my Glow game are falling out onto the pages in front of me. 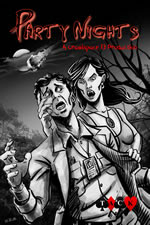 Just wait until you get to read "The Book that dripped Blood". But here's a picture of the first brain drop that was just released.
Posted by Tom K. at 6:40 PM No comments:

As a guy who loves to write, I am not really a writer. I am the guy who pours out his in-most on paper to hear what an incredibly bad writer I am. I usually need the pressure of the deadline, or writing at work where the pressure is to get as much done before the next bit of work that needs doing pops up. And it's funny how folks want me to squander away those efforts for "play-by-posts" and collaborative development. I mention this because I have received yet another invite by someone that I don't know to participate in his Chivalry and Sorcery adaptation of something to do with Atlantis. And this isn't the first Atlantis themed waste of efforts that has crossed my path by far.

In 1999, I joined a play-by-post where the Gm and I were to explore the lost continent. After three emails of me writing paragraphs of one of the guy's duo of sentences, I let the project go.

In 2006, i was invited to brainstorm with a guy who wanted to set up steampunk, superhero setting, during the Napoleonic Wars, with Atlantis somehow tied in to it. And he wanted everyone around him to just do the creative part, and maybe a lot of the writing. What bugged me about the guy after a week of thinking this might be a fun collaborative effort, where I'd learn valuable insight into how to be more creative, is that he kept thinking Atlanteans and 19th Century Greeks spoke Latin. I pretty much went gonzo from that point before just losing interest. I've heard my Locomotive character, Hulk-Meets-Frankenstein-Meets-Pig Iron, was a big hit for months before the fellow's mother told him that he had to get a job and stop playing on the internet all day. My AustroHungarian apes though sucked I am sure.

What is it about the lost continent that people want to fill it other people's ideas?
Posted by Tom K. at 9:51 PM No comments:

A Lot Of Movement Behind the Curtain 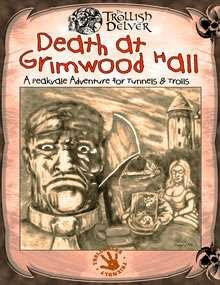 Well I have finally found a format with which to do my Crawlspace 13 scenarios in. Look for "Party Nights" coming soon.

I mostly wanted to post about a couple recent works by my friends Scott Malthouse and Jerry Teleha.

Perfect for Halloween and put out just in time for it, is Malthouse's "Death at Grimwood Hall." part of his very Gothic Peakvale campaign setting.

And now that Teleha has finished Stay Alive! expect to see a collection of scenarios entitled Apocalypse In Your Hometown early in 2014.
Posted by Tom K. at 7:32 PM 2 comments: