The Draw of Real Life Sessions

"Why I am writing this script, when I should be role-playing it?" John Greiner, paraphrased.

This past weekend was one great table-topping RPG festival. While I didn't go to Con on the Cob, a local favorite party/gaming con, like Beckett, the gaming was abundant. Since Friday evening at 9pm, it has been a pretty full RPG schedule for me. When I haven't been working on writing RPG material, the games have come and found me.

On Saturday my Icons game "Crosshairs of Thrill-Kill" began. Peryton, Curtis, and Wylde (Charlie Wylie) jumped right into super-heroics in the nightclub scene of Marvel City. Peryton's Citrus Shocker got hip again by hanging with the newer super-powers Disco and Land Shark. JerryTel didn't show up to fill out his Groovy Lad creation, so I used him as an NPC. Now while superhero plots are simple, I was very happy how my broad and very detailed notes made the setting feel lived in. Also, Wylde and I spend chat-room time together talking about gaming in general and often enough his characters. The back-stories we developed worked wonderfully. By the end of the session I introduced 18 NPC heroes and villains, mapped out a city still in my head, and had a great dance scene. Things went really well.

Sunday evening, I finally met Beckett's intimates Todd Pressler (the Todd) and John Greiner (John G) as we met to play in Zak Smith's A Red and Pleasant Land (RaPL) using the Dungeon Crawl Classics rule systems. This was my first session, the second for everyone else. This campaign actually started out with a discussion between Beckett and myself where I kind of challenged him to show me how the work, RaPL, can work as a tabletop piece. The session went swimmingly, but I haven't been convinced yet as to the campaign working.

Well, anyway, I haven't posted a blurb in a while, so while I need to be working on Crawlspace scenarios, I've been goofing off with the best.
Posted by Tom K. at 11:40 AM No comments:

This weekend off was meant to be spent finishing up my Crawlspace scenarios for Halloween this season. I've been dealing with cat drama instead. One productive thing I did do was go to Cinema Wasteland. Not that I got much writing done, but I was able to attend a panel entitled "Killer Bees, Blood-thirsty Vampires, and Elvis" where actress Suzanna Leigh regaled the audience with her working in horror movies as well as some other points in her career. Normally I get impatient and know just when one of these panels should end, but this one ended too soon. Mz. Leigh is a great storyteller and has some great yarns to spin. Not sure if you've noticed but I do like me tale-spinning.

Hearing her experiences on the sets of her productions got my mind working out some new angles for Crawlspace scenarios. The sessions should have some "behind the scenes" color. A cranky director making to much ado about nothing. A microphone slipping into a scene and the Character getting to use it as a weapon. Going a little "meta" as they say, the whole premise is already, I know, but I am slow learner. 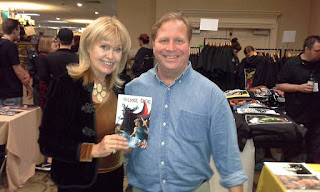