I didn't run anything until Friday evening, which gave me pretty much all morning to go back to swimming pooling. This time I did the hot tub until I about died instead of the sauna. This left the afternoon free to lounge and relax. At least until I noticed that I didn't have my scenario outline print-ups. Rushing to the office area, which happened to be by the Carnage registration desk. Here I ran into Zach, the Carnage son. He was actually getting a room this year instead of hoboing it in his car, crashing with "Carnage Mom and Dad" (Peryton and me), or the Brat Pact (Spacers(TM) kids Heather, Patrick, and Derrick). His was bigger than mine even. He helped me re-print my outlines and brought some beers up to the room from the brewery that he works at. 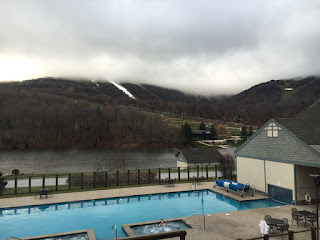 At 7pm, well 7:20-ish, Patrick, Derrick, and Zach all showed up for my Crawlspace "Spook Story" scenario. I tried to turn the classic gritty spy tale into a version of the Sixth Sense. It worked out okay, but I didn't get my desired gimmick of going from the atmosphere of an espionage-laden detective story to a psychological horror story. Instead I got a pretty decent David Lynch like mind-flik made better with the high quality players around me. Our familiarity with each lead to about 40 minutes of pretty much just hanging out and speaking about their college projects. 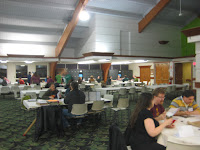 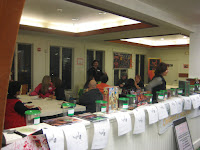 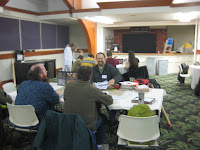 My Spacers(TM) "Dune: The Rock Opera" set for the 11pm-until whenever slot lost Patrick, the guy who made me offer to run it this year, and I was able to push Steven Dresser and another fellow over into Petra Jackl's Fiasco "Viva Las Vegas." So I was able to slip over to a newer GM's, Roy Larsen, CoC "Just Another Ghost Adventure," where I got to work on my Trans-Atlantic diction and accent in a 1920s game. Really had a lot of fun in that last one.

Coming back to the room, I was totally not surprised to find Matt and Robin hanging out and little worse for the wear with 2/3's a drained whisky bottle sitting on the table between them. I have no idea what we talked about, but I ended the party, like the old person that I am, a little before 4:00am. 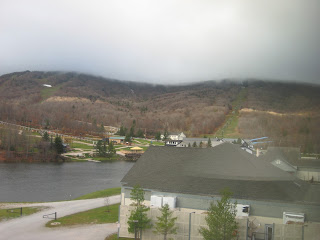 I really must be getting old, because I was awake at 11am, and almost running late for my Saturday 1pm game of Red Bat (whatever, Gonzo?) "Operation Magog: Cave of the Ettin." This had originally been crypto-Biblical fantasy RPG scenario, which due to a typo on the on-line registration it turned into a super-spy versus Nazis story line. I have no idea what my full table that I had expected, but it turned out to quite a enjoyable session to run. The Characters took a left turn when I expected everyone to go right, so to speak, but I had the work sandbox enough I could work with it. It took a while for the "twist" to come into play, but the players were strong enough to work through it. When the session went from technicolor WWII costume and prop festival into full Hammer Horror mode, it got everyone, including me, fully into the game. By the time the group flew away in a flying saucer from the Battle of Mon Casino, I was already thinking of the sequel for next year.

At the 7pm game, one that I really want to run one day, Red Bat "The Wrong Side of History." Steven Dresser came up and pointed out that he had signed up for the game, but played his turned away coin from the night before (the Dune scenario) to let me know that he'd like to run his Pathfinder campaign intro scenario "Hartsford Heroics." Luckily the other player that showed, Sandor Silveman, was willing to jump in as well. I really had a good time. I don't often do D&D, but Steven's hinted at world was very captivating. 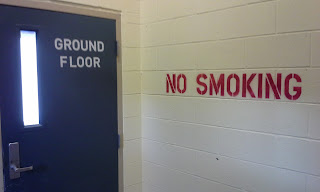 After the game I waited around for a meet-n-greet with Scott Legault and Petra Jackl's Dark Phoenix Productions. Since it was Saturday night and they were serving only spicy hummus, I only stuck around long enough to say to Andre Kruppa. Back at the room, Zach and the Absurdist Twins (Matt and Peryton) were tripping out over the arguable existence of a basement in the resort. I am sure that there is one, but the on-going drama was some Jungian-level LARPing that was intoxicating to watch. Later, I actually pulled Zach out of laundry basket, calling him a basket case, and refused to endeavor to his Notes From the Underground basement. Everyone disappeared "for a smoke" at around 3am too long and I wanted to go to bed, it would've been 4am according to the Daylight savings time clock if just left unchanged. So Pery and Matt wnet and found Scott and Petra's real party. 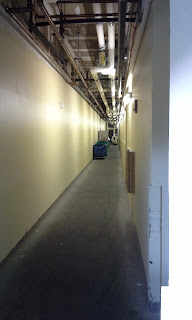 The next morning, I was able to bundle up the hungover Peryton and her bags into the trunk of the car and escape before any bodies were discovered. 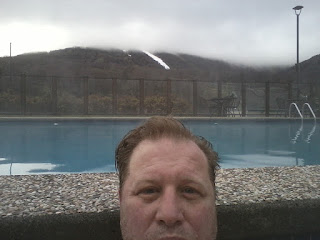 Going to Vermont this year for the Carnage Convention was awesome. I needed the trip. Not because I was overworked or really stressed out, but because I needed to get around the mass of great gamers to get energized. I haven't seen my PeryPubbers since August. While my local gamers are awesome, we've all been too busy to really game. Beckett was just opening his own gaming store (Weird Realms), three have been caught up in the World Series, another was moving, one was way into the election, and Peryton just doesn't often like me. So getting into the car on Wednesday night, was pretty exciting. So exciting that we left all my printed scenario outlines with the shopping list for the trip in a shopping cart outside of our nearby Target store.

The trip itself was, as always, a lift. For the night drive Peryton and I were doing Bowie albums because there wasn't much to see. So when we arrived in Syracuse at our special Red Roof Inn, it was very romantic. We even got a ground floor room. The next day while visibility was better, it wasn't much so with all the rain. The route we took was inexplicable due to relying on GPS and having forgotten to bring along even rudimentary maps, but hey we probably saved fifteen meters here and there.

Once we got to the Grande Killington Resort, the Thursday evening pre-show was in full swing. Dr. Nik and I had our obligatory hug in the lobby, where we checked our schedules and realized that we wouldn't see each other for the rest of the convention (as usual). I thought about heading to the pool but Robin made sure that Matt and Steven Dresser were in the room to keep the conversation alive until it was time to start her game "Aliens Love Jazz." T.D showed up not too much later and we were able to pull Ray Hickey into it. Matt disappeared just before Ray showed up.
Thursday night was Pre-Con party night after the game as it always is. TD mumbled something the Game of Growlers being in "...room 329 or 327. Which ever room is open and loud." He had to go check on something and would meet us there. We stumbled down to room 329 and busted through an unlatched door. I announced our presence with a party gift of New Cleveland Pilsners. from the Platform Brewery, for anyone willing to try and everyone was talking about comic book heroes, Batman in particular. Something strange happened then, I turned into the half-sober, observant person of the assembled group. I noticed that the two groups, the folks sitting at the couches and us newcomers, weren't mixing it up. Every time someone reached for the bottle of Maker's Mark on the counter between, the couch gang would scowl.
I dragged a chair to the couch group and did my best social graces, which is like a 4th grader at a biker bar, at the best of times. Through a couple minutes of dialog I discovered that this was the after-party for the Vermont Educators' Information Systems Conference. After a few minutes of the folks being polite, I slipped back over to the party at the other side of the counter.
"This party is a teachers' conference." I said to Robin, with Steve and Ray close enough to hear.
"It's free booze." Replied the Peryton as she grabbed the whisky bottle, and the stares from the couches ensued.
"I'm going to the pool." I said finally.

Spending the rest of the evening swim pooling, until the staff called the police to get me out of sauna, I would receive texts from Pery like 'Oh the party is in room 327,' 'TD found us, Loce yuo.' After a butt dial on my phone where Robin was saying "My thouffts on religion..." I walked down to room 327 and found her and Steven D hanging out on the balcony. Seeing that it was him and not some creep in a red tee shirt or something, I returned to the room. At about 1:30 am, Matt knocked on the door. Though I was getting ready for bed, I had him come in so I could find the text with the room number. Steve, and Peryton busted into the room for the night cap. And there were Matt and I sitting on the edge of the bed, with me in bath robe. We all had fun with that scene for at least 20 minutes. Steve started telling us about the Pathfinder campaign he and Matt were working on. I asked about the other party. Robin explained to me, "I thought you were speaking metaphorically."

The nightcap lasted until about 2:45.