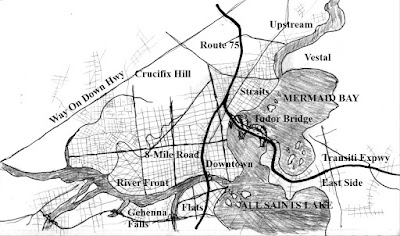 Here is the map that made into the photocopied issues of Egg City, nominally for Red Bat. Part of my "small press" series of games where I try to go all late 70s and early 80s with role-playing material.

So take Detroit and get surreal with a sense of a 1970s low budget movie. SO of course you get martial artists, cops, finely-dressed ladies, and vampires plus a guy who is in a bunny suit. All of whom kick ass and take names. Since this was published around Easter as well as the Easter Bunny, Jesus Christ vampire-slayer figures pretty prominently.
Unable to stop my inner gamer, I couldn't stop there. The Mayor, Yosista, might or might not be the goddess Oestara. There are otter-people as well as fighy-folk down by the harbors. And there are even neanderthals kicked out of the country to make their way in the big city. 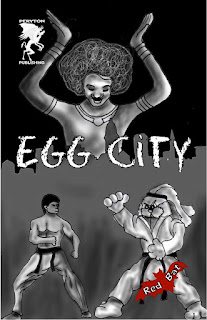 Apologies for anyone really wanting me to present a world every week. I have a lot of settings from being a dyed in the wool fantasist since I was 11, but I tend to take months to years outlining a few pages of notes. Designing a world a week might be a fun gimmick sometime, but for now it's just a catchy title for a certain type of blog entry here.
Posted by Tom K. at 7:27 AM No comments:

No One Way Streets

Around day three of GenCon, at 2:14pm specifically, a return Crawlspace player asked me, "When is your Western game coming out?" I didn't have an answer besides, "We'll see." Now, a week later, someone else, via email, has asked me when the western (cowboys versus cowboys, and cowboy-approved indians, I infer, invited) is planned on coming out. While I've replied in length to that emailer, it does give me a moment to blog about in game design.

Okay, no. I am not going to be writing any games based off of movies besides Crawlspace. In my mind, it is for campy horror not a serious discussion of films and the types of them. Indeed I can explore various film genres by thinking of new game sessions say in this or that locale with a certain audience in mind, but if there's not a vampire or supernatural twist to it, I might as well be running games like Gangbusters, Bushido, or Boot Hill, or some such. Niche setting RPGs and their GMs can be some of the best roleplaying sessions ever. The commitment by the game master and the players to the atmospherics and details lead to some of most immersive one offs or campaigns. 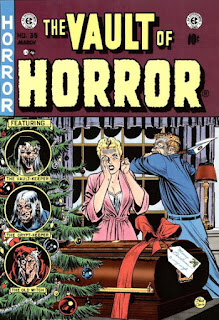 The more places I take my homebrew into new areas of camp, the more interesting it is to me a its writer. I also get the perfect chance to get a group of flexible players, that is looking for the event that isn't much like the one playing at the next table during conventions. Not to say never, I did do a specific campaign type with Crawlspace Gothic, but that was more a vehicle to explore specific creature rules that I had developed in public elsewhere (in-play and online) while paying on homage to Hammer Films w/o writing a whole RPG game about it. And it worked for me that way, I thinking Peter Cushing had just died a few months earlier around its release.

So while there will be more source books, I have bought the cover for one already, almost two years ago now, they'll be more like observations and particular sub-genres of horror than comprehensive tomes of wisdom. Hey I am not a GURPS man. 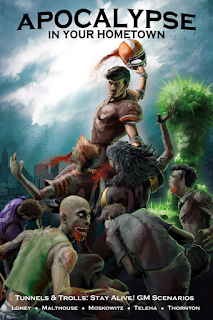 It has been awhile since I went all journally/traveloguey, so it is perhaps time to do so.To say that this was a good year is an understatement. Now nothing really amazing really happened, indeed it might have been the lack of stupendous that made it fun. Everybody was doing their thing and we met for drinks and dinners and in general had a great time.

Wednesday pulling in was exasperating, but by far not the most stressful arrival at GENCON ever. We hit rush hour traffic and then once at the hotel, the Marriott (not the JW one) dealing with a minivan driver that had to park diagonally while taking 20 minutes to start to unpack gave me some time to sunbathe and shut off the engine. Old Home night had the usual suspects and the Market clan, with a new one added for variety, Afterwards, we turned a prep-session for Kal Luin's Saturday night LARP into the second locale. Believe it or not, it was helpful as well as fun. Peryton would stay up much too late torturing Curtis, the Purple Pimpernel, with a drunken stand-up routine as she prepared for her upcoming games in her own way.

Tales of Count Vulgarr
This year every spot that I had was a Crawlspace game. On top of that, the AM sessions were always for Crawlspace Gothic, specifically rehashing various Count Vulgarr yarns that have been recurring since 2008 or so, by myself and about three other GMs. I did these because most of the scripting was outlined and not requiring a lot of head-space to get typed up. I didn't know that most everybody in all of my groups had heard of the vampire not my game system. It was kind of hilarious. 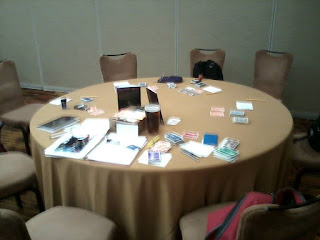 "The Crypt of Count Vulgarr" was the introduction scenario on Thursday AM. Really fun group, mostly Hammer Film fans so it was easy. I was supposed to take them to the Castle Defnel for the climax, but the players had other ideas. Really worked out well ending up in the laboratory of Professor Henrich von Alfred, Vampire-Hunter LLC.

"The Return of Count Vulgarr" had a smaller group, four friends from Kansas City, that had all their parts worked out before they even got to the table. I pretty much got to sit back and eat popcorn for this session. Took them forever to figure out that wooden stakes work best. 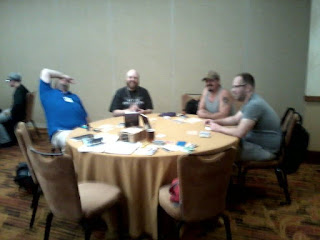 "The Bride of Count Vulgarr" went just as awesome. The bride had been actually married about two weeks before the convention and got to work on her bridezilla that she didn't do in real life. The Count killed most of the vampire-slayers before sweeping off with the Chief Inspector of the local police, the Bride's IRL new husband. 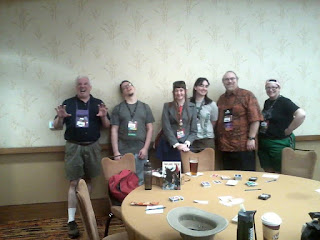 "Return to the Crypt of Count Vulgarr" it was Sunday and everyone was tired while I was more than willing to show more than a little sardonic patience at questions asked the third time. Still we got it together, because we all insisted on having fun. It was a game filled with unexpected drama, strangest characters died, including the expected hero, before the creepy blood-sucker escaped yet once again.

"The Dig, part II," "Over the Top," and "The Sleep Study" all were full and had both new and returning players.  "Cave of the Ettin, part III" was a wash, but hey it happens. I was able to sneak into Exhibitors Hall while the attention whore spectacular, err the Cosplay Parade blocked as many entrances as they could. Really it was was not busy in the selling floor for at least half an hour. 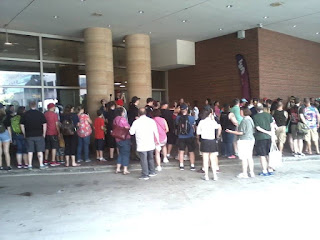 On Friday evening, Peryton and I caught a come as you are dinner with Caed (of Caed Phaser fame) at Scotty's Brewhouse. The menu no longer included the mini-corndogs and mustard, but it is still one of the better places for gaming folks to dork out at. We, the evil three had a great time catching up. When Caed's son Dylan showed up, he was in for some rough teasing. He handled it well. W.E.B., the bastard, called on later that night, luckily only an hour before the end of "Over the Top," so an impromptu late-nighter developed. It pulled Curtis, Peryton, and Darronn out of their comfort zones maybe even bed to drink and deal with the two of us. Oh the hangovers did flow on the morning. 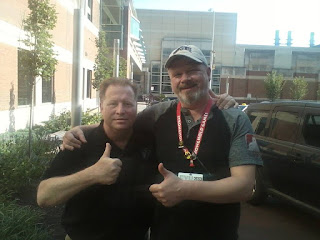 On Saturday, I helped out Kal Luin's LARP, "Metahuman Metropolis: Rise of the Overlord." John Bennett and I alternated as GM and NPCs. Not sure what everybody else was doing in the room, we were rocking our little group though.

Sunday, after "Return to the Crypt," I did my Exhibitor reconnoiter and obtained some requested bits of Lamentations of the Flame Princess, or some such, for a friend as well as some Modiphius Star Trek and another Rifts, Phase World book. Then Robin and I sat down for a bit of good old convention center pizza-- it was pretty bad and expensive, just the way convention pizza should be.

We spent most of the evening chatting with Bruce Wayne, and then others, with dinner and drinking. I kept running into people from other years that I had ran for, which lead to more drinks and even a couple selfies. A dude remembered a Glow session from like five years ago. One fellow complimented me on my daughter's, Saharrah's Crawlspace game-- sadly I had to correct him, she's just the game's first hot chick that sells games, not any relation besides adopted uncle status. Monday came and we even left on time. 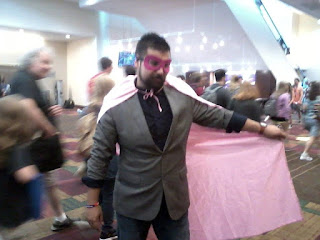 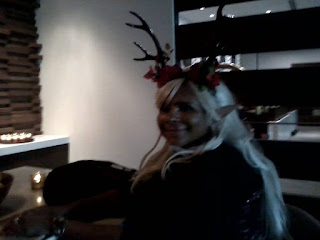