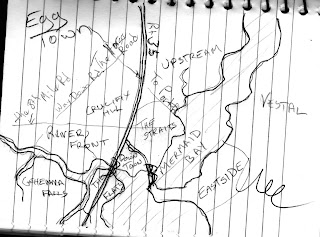 So from pimps and pushers to vampires and messiahs, this urban fantasy setting has been batted around by me for some time. It started out as something called "The Straits." Adding in the Easter Bunny as kind of the incredible Hulk, things went weird. Well, weirder I should say. I will add the map that made it into the PDF/game-zine later.
Posted by Tom K. at 2:08 AM No comments:

Posting for a Spacers(TM) session to continue the play-testing started an impromptu Hoot weekend. Last Saturday and the next day was three RPG session half-marathon. Jedi, little Tom, and Sarah decided to come up to Cleveland from Springfield and were looking to do some serious tabletop partying. Then the "Frequent Sundays" ICONS campaign with Curtis and Mr Wylie from Oklahoma took place on-line two hours after that other gang left.

I am making notes on each session adding hard parts from the SPACERS(TM) Core rules and adding in the players' touches as they occur. This is mostly to watch a sci-fi campaign grow organically-- I other scenarios and campaigns have been tightly defined but the CLE-216 Frontier is not. With the help of Colin and a couple of unplanned visits from out-of-towners, the Saturday group at the Weird Realms has been the place to do that. I outline a session, re-read the rules while we play, and then type in problems and working parts in the after notes. This session in particular Jedi helped me focus on problems in ship damage system while enjoying Little Tom's technobabble ability while playing a "Fixer" Type. Peryton's Psychic character is helping me expand that aspect of the game as well.

The Saturday role-playing didn't end there. Sarah, on a lark, decided to do a first run of an idea in her head for Crawlspace Deluxe.  Mixing in the actor/producer dynamics into the story line, she took the college kid survival horror drama and mixed in cannibals and folklore. It was fun and we, mostly because of tipsiness and fatigue, dove hard into the All-In Hand mechanics. Jedi started coming up with a 7-card Holden variation which I over-ruled for the session, but may delve into more the deluxe redux edition. I would like to see the "EAT ME!" scenario published over the summer. We'll see what happens there.

Peryton and I were able to shrug off fatigue, sipping whiskey and drinking coffee, respectively, to conclude a story-arc which can only be called "The Chompers Cycle". This ICONS super-pets issue was just wrong and definitely not approved by the Comic Code Authority. More than a few of obscure members of the Scrap Pile, our "Avengers/JLA" super group, were able to make cameos, the GM doing their personalities while their original players watched. It was fun and showed us how rich our superhero campaign world is despite more often than not used for over-drinking with far away friends without the dangers of drunken driving.

So that is how the "off season" is going for gaming. My efforts to reconnect with early ties to local gamers, doing so-so, but what a time for Cleveland being a RPG tourism market.

Well I started an ICONS mini-series

Not really new. Of Curtis and Peryton, I am the least prolific runners, so I try to make mine special. Part 1 of my Scraps of Magic, "Something Witchy this Way Comes" worked out. The characters of Chance Montgomery (the Occultress, whether her play likes it or not), Counterfeit, and Jay (not just Jay, but Jay Ramirez), are gelling into a quirky group of supernatural protagonists where their arguments with the universe of magic and metaphysics is often more drama than what I provide in my story.

She is only called this by pervy would-be boyfriends, that happen to make up 99% of Chance Montgomery's private investigator business's clientele. She is a better detective than your average gumshoe because she is psychic as in seeing the past and glimpses of the future. But she's also really unlucky in love and war. There's more to that last statement than I want to go into right now.

Not saying this is a creature that has been summoned from another world and especially not a minion of a powerful spider demon, but she is. Her illusion ability is only hampered by her bad taste. And then there's Jay

Something of a witch in his own right, he's just nowhere near as good a bruja as his deceased Nanaita. And she keeps telling him this, as she is able to possess him when he wants to cast spells harder than he is capable of. Of course, her walking around in his body has it's drawbacks, which I am going to get more into as our little campaign progressesThe four were hired by Doctor Philosophy, the current keeper of the Townhouse of Terrible, to find out what happened to two of his friends, Professor Prim and Mz. Dames. The two occult scholars were keeping tabs on a group of shady cultists before they disappeared. Our trio not only found the group of witches, collectively known as "the Coven" being lead by gender-confused Natalie Reverend, err Nathan Rev, "the Warlock." They then discovered that the destructive paranormal entity known as The Burning Man had been summoned from his "Morning Star" portal, which usually does not bode well for the place where he is walking around. There was also the the very mercenary anti-hero called Night Ninja, that looked a lot like Marvel comic's Moon Knight, except there was no cape, and he wore gray, so totally different, hanging around.The group did their best to find the missing persons but only ruled out where the two were not. The post-cognition sex scenes were avoided to keep things PG-13. They were able to find out where the Burning Man was going to appear again, right where they and the Coven were. And in a plot twist that worked out really well, it was discovered that the "shady cultists" were actually trying to banish the metaphysical wave of destruction after it had been summoned by Prim and Dames, who were the super-villains Hypnos and Moon-Wolf respectively. Supernatural fisticuffs ensued, with the Magical Scrappers being able to turn the tables on Hypnos and Moon-Wolf. The Coven was able to banish the Burning Man, but at the loss of three of their members and Natalie... err Nathan Rev, their "Warlock." In the explosive departure of the Solomon Grundy aflame, Night Ninja helped the other villains escape.Upon reporting back to Doctor Philosophy, they learned that Night Ninja had been busy elsewhere stealing the Key of Kthom-Kopf as well as helping his fallen friends. It was here where our protagonists decided to become a trio of heroes, especially when the metaphysical master offered to keep them on retainer for the duration of the investigation.
Posted by Tom K. at 2:50 PM No comments: