It's all about what you really want.


Do you want a coloring book for your RPG? Well then 9 paragraphs, a couple charts, and add 20,ooo  mediocre photos/ free illustrations. Sell a thousand games in two months.

Do you want to draw outside the lines a bit? The play whatever White Wolf is publishing these days. D 10s, LARPing, failed on-line communities.

Do you want to Game with people looking to play in a game? You either find a game that is not D&D or you make up your own rules not based off of the OGL.
Posted by Tom K. at 8:37 PM No comments:

A Game You Probably Haven't Heard Of
Unicorn Hunt ! I added the exclamation point. A friend of mine from BASHCon for a couple years now, Cory Tucholski finished his "make-your-own-adventure" more than a year ago, but I wasn't able to pick it up until the last time I saw him in February. The author is one of those horrible parents that make their kids come and play D&D with them at gaming conventions, but he makes up for it by writing books for them. Unicorn was written because of his daughters infatuation with unicorns, so Cory wraps in a lot of magic and a bit of history for a younger reader traipsing after the mythical beast. I read through the work over the last few nights at work, and kept dying, but hey, that can happen on an adventure. There are some eightteen endings advertised and artwork by Hirday Jayara, so it might keep the kid reading it busy for at least 30 minutes, enough time for the ravaged parent to finish a smoke and a quick conversation on-line even. A King Kong of a work for sure, it would've been a Godzilla but Cory always rips on Burger King which I cannot forgive. 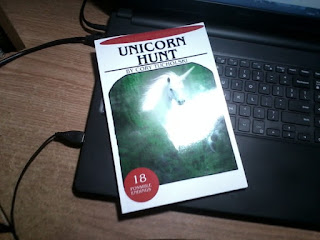 Every Time At the Table
So on Saturday, I was supposed to resume my ICONs mystical superhero mini-campaign. Our household's cat-sitter during longer trips needed the night off of work and asked me to cover her shift at the milkshake factory, so I had to bump the session to Sunday. It was then I found out that one of the major players definitely couldn't make it. He probably couldn't make it on Saturday either apparently but why tell me before I moved the date around anyway, right? I still had the itch to get some table-topping in though, so I announced an impromptu Wobble game. And why not, that damn setting has been bumping in the closet for about ten years already. Expected usual players, like Peryton and Trey Renee,  wouldn't show up. JerryTel, something of a stalwart Wobbler already, did and so did Jay Murphy, the Xothman from here on,  (of UBS Xothic fame over at G Plus) whose usual Sunday group, using CoC/BRP rules if I remember correctly, is in disarray as their 17th Century Dreamland's cycle heads into its conclusion.

So Xothman developed Professor Hammerhead, an astrophysicist whose brilliant work into dead energy got him hired into the Baffin Island  Facility, Wobble Bay, a few months ago. He works for the UK contingent which often acts as go-betweens for the EU contingent and the Americans, because the Canadians who own the place won't bother with all the pettiness. JerryTel became Commander Franky Berg of  Earth Command's Space Force from the MuFO Earth in the MU Continuum.

Hammerhead would be experimenting with a Dead Energy capture device right at the same time that CDR Franky, to his friends, would be leading his Manta interception squadron into a dog fight with, of course, UFOs. Somehow, as if by a whimsy of plot convenience, the Manta's cockpit/life boat would appear in the laboratory right next to Dead Energy Device, the Q-47 (from here on). Exploring the device the Italian security detail assigned to Hammerhead would release the MuFO native who was in full combat mode. The security detail would make short work of the sky-boy as they were airborne infantry, quickly having him restrained and ready for interrogation. As Franky was prepared for the Others, aliens in UFOS, playing mindgames with those that they capture, the initial interview with Dr, Hammerhead would not be very productive.
US Army CWO2 Lagge (pronounced "Lag") from Exploration Teams, "X-Teams", US of course, would show up and ask for help with a new acquisition of of his own. At the same time as Hammerhead's incident occurred, the US teleportation laboratories received an vessel that could only be described as life pod for outer space. Out of would step a sleestack with its hands in the air. One of the troops on security would call the being a sleestack to its face, at which point it shut up, apparently insulted. Perhaps Hammerhead could get somewhere with him. The alien would identify himself as "Hisssss(inhale)Pfit." Hissy Fit, would identify himself as a Traveler who was hired by customers to help Travel their ships when they were attacked by space savages.
Hammerhead wanted to get the Tzakk, what the creature called himself, and "sleestack" means hillbilly in his language,  and CDR Franky in the same room for a cross briefing. Chief Laggy was having none of it, the guy was under American protection, on the behalf of the International Multi-Dimensional Travel Research Forces, after all. Ones does not simply walk in to, err cooperate in our corner of MU Continuum.
Back in CDR Franky's cell, (Jerry was back from an important liquor run IRL) having had a sandwich and coffee, the fighter pilot was calming down.  He had been part of his universe's Wobble experimentation, which had gone no where as far as he knew. With his blood sugar up, he was willing to accept that maybe he was in an alternate universe of his own Earth. Hammerhead was happy to hear it!
And then walked in Laggy and Hissy Fit, and I invoked Rule 117 from the Wobble book (page 111).  You see, Hissy Fit, Laggy, and CDR Franky had all wobbled before which set off a chain reaction sending them out into the multiverse. Professor Hammerhead would now become a Wobbler as well. JerryTel and Jay would then pick their ID STAT to close out the session. Trey Renee and Robin (the Peryton one) have both said that they would be there for the next session. I hope Pery practices her TransAtlantic accent. She does that Character so awesomely. 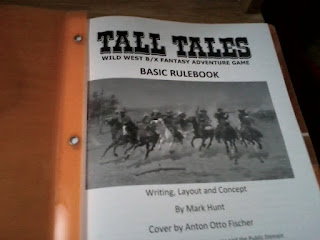 Remember the days of the Boot Hill RPG? As part of the OSR/OSG reformation of OGL D&D, Mark Hunt, with the help of his pal Anton Otto Fischer, has crafted the Old West rules system for the 21st Century.  Tall Tales: Wild West B/X Fantasy Adventure Game is the author's latest work, I think. Who knows? It's been over a week since its release and this guy is always working on something. In case you haven't heard of him, he's the guy that redid Gangbusters and has been expanding that classic game for a few years. His taste for period specific settings has proven a plus for this Basic/Expert take on the cowboy days.

If you've ever wanted to play in the Wild, Wild West but hoped to avoid the worst of the cowboy and Indian tropes that make up so much of this milieu, this is a good place to start. Players get to take on the roles of Gunslingers, Desperadoes, Mountain Men, Braves, Singing Cowboys, and Snake Oil Salesmen, Now I've never played or read Boot Hill but I bet the PC Classes did not sound like so much fun. What is an OGL game without Alignment? No worries folks can be "Law Abiding," Neutral," or "Dishonest." Hunt adds OGL-style charts for background notes that fill out the Nickle-Book Western feel of the world around the characters.

The GM has a great foundation to start a campaign world. As you'd expect, atmosphere and tone are very established. The weapons and equipment section, from the Trading Post no less, is pretty well rounded but not overly extensive as is the fashion in "true D&D" terms. Don't worry Nards, you get notes on coffee pots and holsters. Where would the adventuring Singing Cowboy be without his troop of NPCs? They are called Hirelings in this work. Logical rules on mounts (donkeys and horses) strike me as really workable. There are guidelines on stuff like judicial matters and random people to encounter. I especially liked how Hunt remembered that hirelings/randos should be described (Hey I am an Elmore Leonard fan) to help fill out the tale being spun-- he does so with a chart to make it nice and crunchy.

Overall, the book is a King Kong of a purchase. I might start adapting some of my own Western stuff to it. Right after I learn Spanish and run a marathon, but hey, this is a really good game. Now if it had original art it would be a Godzilla. In any case, buy the hardback version, get the author's autograph, and set up the basement as Tombstone, AZ, and get to making some big a heapums of Tall Tales.