This year was GENCON's 50th anniversary. This convention is a creature more like a bear than a dragon. It grew too large for its spot by the lakes and forests of Wisconsin and it had to move where easy pickings of high calories (like cheesy and syrupy garbage) are available-- Indianapolis, capital city of the Corn God. Efforts to move it to hipper, more happening climes, like say somewhere on the West Coast, only irritate it. It only notices that its uncomfortable when it comes to sleeping, and even then if it's too busy, it won't notice.

Before traveling to Indy this year, I spent about as much time as I usually do getting my scenarios ready. Of course instead of doing my maps and graphics, I spent the start of this vacation playing Civilization III (plus), just so there'd be that element where I must be stressed out at GENCON about something. According to the interwebs there was plenty to be unhappy about. Recurring personages were complaining that it was too hard to get rooms. Folks were up at arms because there would be a Sunday morning mass across the street from the Convention Center directed at gamers (apparently gamers aren't good atheists). There were other issues but it was mostly about how hard it was to get rooms. I was happy to see that my GENCON package was a file of some 40 pages of a flip chart (the kind which doctors use), a dice bag, and 9"x 5 1/2" x 3" box with multiple card decks and Crawlspace Character sheets. I threw in some just arrived spare copies of Crawlspace and Crawlspace Gothic, to fill up the book-bag. Getting Peryton into the car was easier than usual. I had done all the housework over the four days that I had off before hand.

Wednesday was a test. We hadn't reserved a special room or table at any restaurant. Folks had been notified on FacetuBe (my word for "the Facebook") about three weeks before, not through about six emails. Instead we ended up in an organic gathering at the Crowne Plaza bar, where we had done it the year before after our restaurant reservation fell through, starting at 8 and lasting until whenever. What a party it was. A little stiff at first but by the time Bill Bricker (of W.E.B. Design) showed up looking to make drunken mischief, we were ready for him. Peryton even joined in to accompany the group to second, then third, then we lost Bill, and finally the fourth locale. Home, as in the hotel room, around 3:05am, with the latecomers from the Chicago LARP brigade already in the room as we were putting them up for a night. 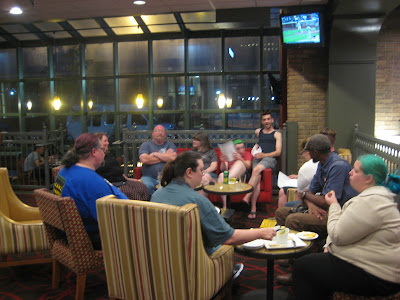 Thursday was awesome. I was sad because both of my Wobble games were a wash.  My morning "Eye of the Needle" had one player show up. I did an hour-long "talk thru" before the person (Russ, whom I know from many other games) got tired. At the second game, "On Dealing with Satanics," absolutely no one showed up, and when I dutifully dropped off the "0 sum" ticket the person at the desk tossed it, in front of me, onto the floor. I almost walked into the Dealers' Room, then a female cosplayer fell down in front of me and about twenty dudes rushed in front of me to help. The staff at the door looked either confused or on. This scared me away. But the rest of the day was mine, to do with whatever I wanted. Katie Oh from the Chicago Brigade invited me to a party somewhere. I declined and fell asleep watching Blade the vampire slayer on the SyFy channel.

Friday I would have no such luck though. I would have to perform both Spacers (TM) "Green Pod is Active" and Crawlspace's "Detroit Death Metal Audition Apocalypse" to sold-out, plus, tables. Spacers (TM) doesn't normally sell out so the mental exercise was fulfilling. I actually had to confirm the math behind ".6C" and discuss ion drive propulsion systems, not to mention time dilation. What a good group of players. In the end, I was complimented on my pacing and and crowd handling. The DDMAA crowd was ready to rock. Apologies to Ajax Tolbert of QAG running next to me. I had a group of bass-players willing to sell their souls to be the next musician in Detroit Death Metal. Sex, drugs, and Rock and Roll were the rule of the session. I closed out that night with Ronnie and Phillip whom had been sitting to just right of my GM chair for the game. Our varied military experiences and civilian proclivities, and wanting to GENCON it up a bit had us drinking until midnight.

Saturday, I was scheduled to take on my latest rendition of "The Horrible Fate of the Haunted House Hunters" (see 2007) in the two linked scenarios of "Death of a Ghost Hunter" and "Ghost Hunter Hunting" both using my Crawlspace system. This went amazingly well. I think I might have recruited another Crawlspace GM to the cause from either Saskatchewan or Manitoba, I can't remember which. I'll let you know later. I would do Saturday evening with Batman, Sligo, and Peryton. That is until I realized that I lost my bag. I actually made polite apologies and we broke up the party. The midnight crew at the Crowne Plaza would not let me see a bag that they were holding because my name wasn't Campbell.

Sunday AM was what I thought it would be. Me picking up my bag from the morning staff because Mr Campbell never came down to look for it. One person showed up for my Glow "Robot Jazz" game, but I folded us into Christopher Dean's I Love the Corps finale. I had been watching him since Thursday weave his on-going saga of space marine fighting. Though I don't like combat RPGs his can be said to incorporate the plot in a combat-driven universe. In short it worked. I had a drink with him at lunch, and Deacon and Alexis from Toledo showed up for a sip as well. Robin came in hungry for lunch. At 3pm, I finally ventured into the Dealers Hall picking up a couple Rifts Sourcebooks concerning the Phase World space opera that it has. We had a false after-party start at Acapulco Joes. On the way back, a cosplaying female was too busy lording (ladying?) over a horde of minions to pay attention to walking. Despite the fact that she wouldn't stand, because how can one do so when so many ppl are fawning one's self, she told me she was alright and I walked hurriedly back to the hotel. 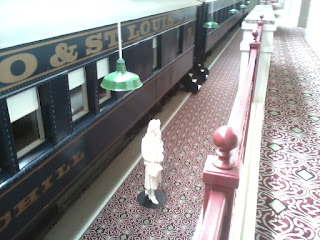 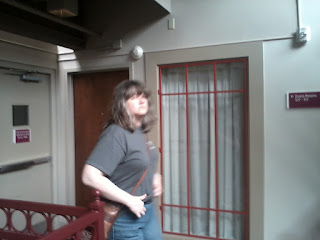 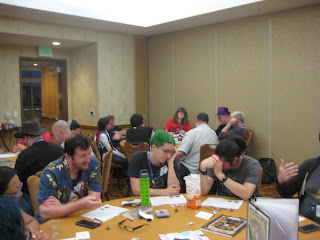 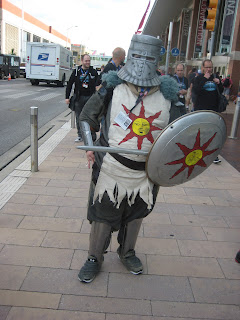 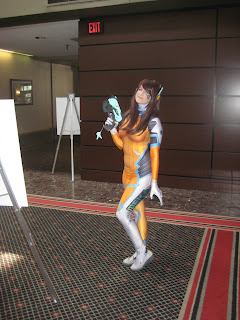 Kal Luin, err Bret, from Canada pulled the Peryton and me out of the room at 8pm. At the Crowne Plaza lounge once again, we spent time with a gaggle of Canadians. And it was quite the party. We were laughing our asses off at a bean-bag tossing competition making ESPN2 prime time, while commercials showing LARPing as "bad fantasy" versus Fantasy Football, where the hobbyist gets to spend money but has no role in anything. It just kept getting funnier. Thanks to Kevin, Brad, Dan, and Kal, this was a great close out to the Dorkness Gathered of 2017.