Driving to Toledo last Thursday afternoon afternoon was the start of a recovery for me. Long time friends and associates will be familiar with our clique's "Quitters Club" phenomena. This is where we make plans to do something and then the day before we do it, sometimes a couple of days before but not often, decide not to do it. It started with Jerry and Robin at BASHCon about four years ago, and has crept up here and there every since. Well last couple of years I've indulged in it as well. Having moved last February and being physically beat-up, I announced the morning of BASHCon 2017 that I wasn't showing up. Later in the year, I postponed my own birthday celebration in the same sort of attitude. Well, driving down I-80, around 3pm, it felt good.

Of course, once in Toledo, my proposed Thursday night pre-convention party had mixed results. It was scheduled later, like 8pm, and no one showed up until 9pm. And that person, JerryTel, had to leave around 11pm. At 9:30, Uncle Gnoll was communicating via FacetuBe that he was there but getting something to eat and could be contacted by ouji board or something similar after that. I actually saw him pulling out of the parking lot as Jerry and I ran up to the corner store to grab a 6-pack. When Jedi and Sahara ( cum new boyfriend, Tiny Tom, we'll call him) showed up at 10pm, we did get a short Crawlspace session worked in. I practiced running the scenario called "The Sleep Study" which I will running at other conventions this year. It went okay and I creeped myself out more than scaring anybody else, but got good feedback from the test audience.

Friday during the day, I spent most of time watching RT America to see what the shows are actually like on TV. Not doing the cable TV thing at home, I see only a couple clips from my Redacted Tonight on my social media feed. As a propaganda channel, as even the BBC and all countries' news sources are, it's what it is. Playing to the weird mixture of disloyal, illiterate liberals and willfully ignorant, anti-liberal GoP-voting authoritarians, it still had enough conspiracy theory authors solving the assassinations of the late 60s and 70s to fill 30 minutes here and there. It was a romp through anti-intellectualism with the trappings of intellectual reasoning. It was fun, but I would've gotten better international news analysis from nun porn or some such.

That evening, I showed up at the University of Toledo around 4pm. There was no registration yet. "We open at five" said somebody in a UT BASHCon shirt sitting in front of a computer with four staffers sitting behind him. I snuck into the exhibitor's area to say hi to Beckett who was still setting up his booth. Actually he was chatting with Ted Mallison who was also running a booth to field his playtest for Whisper City Pro-Wrestling RPG. I went ahead and bought a copy right there. I then went up to the Phoenician restaurant, now on the fourth floor and having a stage, to have a couple beers while waiting. I read the small book during that time, and I found the rules fun and knowledgeable. I also dig the term "Potato Rage."

A little after 5pm, I picked up a badge as there was no line. I then sat outside the entrance to see how long it would take for anybody to open up the doors. It only took 26 minutes, with staffers sitting just beyond them and other staffers walking in and out of them. Convention goers themselves started filing through as well. Finally the boss, a young woman asked why the doors weren't open and received shrugs and baffled expressions from all near enough to hear. It was actually hilarious. 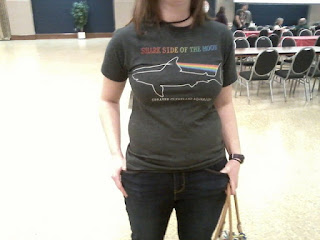 By around 8:00pm, JerryTel and friends, Peryton, part of the Jedi Clan, and Gnoll showed up. We started an unofficial RPG session "A Little Horror on the Prairie, Pt 5: A Bloody Ending." Jerry had eight players, five new ones and the characters that Pery, the Boy, and I have been playing for a few years now in an on-going 1870s Stay Alive campaign. There was some smatterings of role-playing, no one at the table was a noob or shy, then the GM just threw his hands in the air. We were railroaded from the starting point onto a train and to the adventure's release point. And it was fun watching Jerry break the rule against railroading because "We are going to finish this scenario, dammit, tonight." he swore. Of course when the staffers decided to wrap up the convention an hour early at 11pm, it was supposed to be going until midnight, we hadn't finished yet. So Jerry reluctantly agreed that a Part 5b, could be run as a Saturday night event. After midnight, Gnoll had a late supper with Pery and me, which made it a perfect evening. I slept like a stone for three hours at least.

Saturday, while JerryTel and the Boy were running Circus Imperium, their own take on Circus Maximus, I was having lunch with the other half of the Jedi Clan and shopping. Ran into Denny and Marty, part of the Beckett CLE gaming gang. Saw Corey from Toledo for about 10 seconds before losing him for the rest of the weekend. I then chatted with Mallson about RPG settings as an addiction. Jedi and the other half would head out before the evening game. We did dinner, Sahara and little Tom joined the JerryTel clan and us, and then we found a private room for "A Bloody Ending, part 2." Gnoll found us just on time as if by magic. What a game it was. JerryTel's flare for a cinematic fight scenes and use of visual props was awesome. The group being smaller by one person gave everyone a bit of time for hamming it up. We finished up at 9:45pm and everyone had enjoyed themselves immensely.

A heavy snowfall was coming down, so I cancelled a room party for everyone not staying at the Red Roof Inn where we were. Pity it would've been fun to hang with the CLE gang and Mallson, but I did not know how bad the snow was going to get. Instead we sat around with the full Jedi clan and Gnoll until about 1am. Peryton was about to make herself a bed on the floor when the party decided it was time to say goodnight.

Sunday, JerryTel ran his traditional D&D game. Pery and Little Tom just had to be there. So the man was handling a group of about twelve, four of them under the age of 17. I watched some guys in the video game room, where they told me about a video game where the players assume the roles of the deck staff of a starship. I also spent some time brainstorming with Jedi and Jennifer, Jenn, about GENCon and how to hype up BASHCons that don't fall on years that end in zeroes or fives. As Jerry's game wrapped up and he was cleaning up he looked at me and asked if I had done anything all weekend. When I replied no, he said, with some exhausted satisfaction, "I've redeemed myself from the Quitters Club."

The after dinner was at El Vaquero. The whole of the Jedi clan, the JerryTel clan, Pery and I, and Gnoll (coming in late) made it. The poor waiters and cooks and people sitting around us. Still they got us in and out in less than an hour and a half, and other large groups were coming in as we trickled out. Peryton and I made our way home in separate cars, as wasteful and inefficient as it sounds. Still it was a fun party.