In less than six months, I've had someplace in the Chesapeake Bay area get nuked three times. I actually designed the scenario "Nixon's World" in the vain hope that I get to be preachy about avoiding extremism. While writing I was expecting the place wouldn't get nuked too often. I should've already known, the players I've had, ranging from professors to bar tenders in walks of life, having a nuclear bomb show up in a scenario is just too tempting to wait. 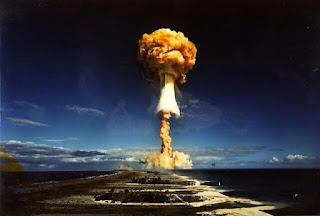 Nixon World: Wewwers (Sewer Monkeys) have taken over an Earth in the Mu Continuum, and since 1973 have kept Richard Nixon alive and in power. Though its astrological date is actually 2016, everyone thinks it's 1979. Everyone on the world has a blindspot where they know the Commander-in-Chief has ruled for over forty, nearly fifty, years, but that he's was elected in 1968. The dwellers of this world have had two generations live through the 70s and remain there, but no one can't quite put a finger on what's wrong. Enter my Wobbling play-testers, here to set the calendar straight in my mind, but I am one of those GMs that only railroads players late at night when everyone is too drunk to think straight.  The Wobble playing has ran a little late, but not quite that bad.

I think I give ample clues that something is amiss, including psychic intuition that the earlier encountered Sewer Monkeys have something to do with the problem in this scenario. The players get roughed up a bit, and ticketed, by the security forces but ultimately kicked loose onto the streets. When the People's Liberation Front of 1976 Onward! (PLF-77!) pulls up in their vans, all the playing groups see Leroy Pole (Shaft) and Tangerine Jones (orange-haired in a big 'fro, political activist really named Ruth Goldstein), they just gotta stick it to the Man. That includes the conservative players at the table in ALL THREE SESSIONS. Sloppy planning aside by my NPCs, show the Player-Characters the yellow van with the Grateful Dead painted on the side with a homemade atomic weapon, folks will volunteer to drive the damn thing. One person, who else but the professor from Indiana U, actually blew up Nixon and Chairman Mao (also sustained by the Wewwers). Two groups have destroyed the city of Annapolis, Maryland and fortified the police state of Emergency Provisional Authority of America. In either case, the heroes have been helping the Wewwer with their "experiment." 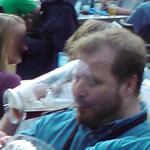 In Sociology class, this would be the "Infant with the Hammer" dilemma. In gaming terms, it is the cause for much mirth for the GM. Which of course means that the next scenario in this three-part series has to deal with Palo Alto circa 1944. What could go wrong?
Posted by Tom K. at 2:49 PM