I termed the "Quitters' Club" when JerryTel and Peryton started the trend of deciding not to do pre-planned events almost a decade ago. This year, I've had to notice that their strategy sometimes makes for better experiences at certain conventions. It makes the conventions that much better and the occasion dearer to the heart. Uncle G'noll, Paul H., couldn't make it this year. He was busy selling his novel at other conventions. BASHCon has become as much his place as it is any of the rest of the groups. We missed him, but as we've all become quitters every now and then, I doubt he'll not be there next year.

Of course Pery and I left Cleveland thirty minutes late and with traffic jams, we'd be an hour late for JerryTel's " A Bigger Bother in Boss City". His continuing A Little Horror on the Prairie saga for the T&T: Stay Alive franchise still draws them in though. He had a full table at 7pm, so we'd meet up at Applebees for the Friday night late dinner. We's end up at Chilis. It was Liam, the Boy's party. JerryTel and the Boy, the Boy's sister, and the Boy's gamer bud, Max, whom I'll will call "Kevin" as my blog's nickname for him. We talked about RPGs and electronic gaming, and the scandals of the latest TTRPG industry until a little past midnight. We closed the place, but tipped well.

Saturday AM came and went.  Most of the noonish hours I spent chatting with Pery, Max, err Kevin, and the Boy. The gang assembled we did the auction with JerryTel until Death Magnet, Cory T., ran our group's big event (dramatic music please), "(something or another in the French Fry Forest)" for the Wendy's hamburger conglomerate 's RPG FEAST OF LEGENDS. He was the trouble-shooter manager for a Toledo franchise of the fast food provider, so we thought it'd be fun for him to wear the Flag once again. 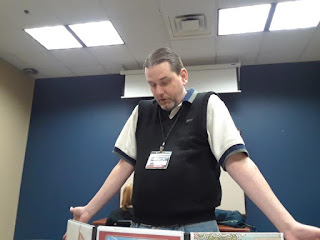 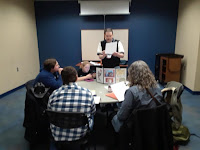 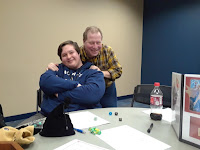 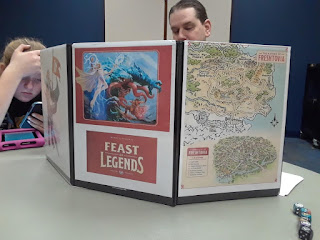 As gimmicky as the game is, thanks to Death Magnet, we all played the game with no shame. The laughs as well as the hardcore, old-school, authentic crunchiness of dungeon crawling came out. The Boy was particularly good at the crunchy part. While Max, err Kevin and I were apt at being the pun-masters--the Pun-Master, the world's most inept Batman villain ever, that is besides Calendar Man. Back to the session, it was really a tabletop masterpiece. I think I randomly picked something of a cleric, a Chicken Sandwich crusader, to play which is alien to my T&T background. I still enjoyed myself.

After dinner, Peryton ran her Gangbusters trial run. Before we started though...
And then Peryton's agenda reared its ugly head
It was announced that with my failure to run "the Trouble in Tellarite Territory" this year, I was now a full on member of the Quitters' Club. After a few stammering excuses, I decided to shut-up and go with the flow. Luckily, the award wouldn't be presented until the next day, so maybe I could still get in front of it... 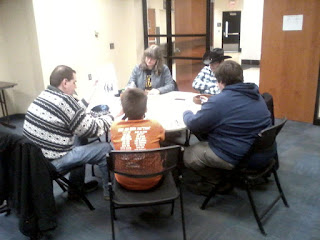 So there we were. Tabletop role-players, all learning Mark Hunt's take on the 80's TSR NOT D&D game Gangbusters. Except for me, I don't think many of the players ever played much of anything except D&D whatever edition. (Not to self: ask Cory the details about his fantasist background). So we all started developing Street-Smart, Brutish, Connected, and Educated character Types. We learned the d20 expectations of the game and had to buy our equipment. Then we were the Slim Gang out of Gary, Indiana circa Feb, 1920. I was The Chemist, the Educated right-hand man of Boss Slim. We ran the Cleveland to Chicago "Route 2 Rum-Drum," where we supplied everybody not in Chicago or Detroit or Cleveland with whiskey from Canada. We had to find out where a new gang was getting some good hooch.
Then we were lured into Bolton County, Ohio. Peryton gave us plenty of symbolism to warn us where we were headed, but we all stayed Humphrey Bogart and Claude Rains. Then at the first pod-person screaming alert, none of us could deny, we were in horror land. Feeling betrayed, I betrayed others, and others betrayed me. My betrayal was when Murder Magnet's character lead us into the Glow. Murder Magnet and my Character survived the session, but we have issues-- pink, viscous sweat-- that need resolution. Max err Kevin, has already taken up the PC mantle for an NPC, named "Matches," from the game to get to the bottom of this ill-fated mystery. With Murder Magnet's survival should I revise the nickname? Naw.
That said, every rule mechanic of Mark Hunt's Ganbusters was used. It works awesomely. After a quick glance at a Character sheet, the player could suggest helpful suggestions to the GM when needed, and the GMs could concentrate on the horribleness that they want to bestow on their players. 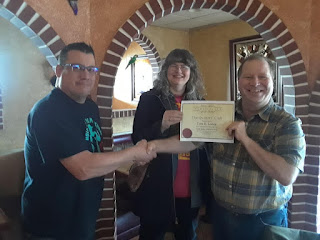 I was awarded with the Quitter's Club, "gold" membership, which gives me hope that it goes higher than that for multiple reasons. As a group at BASHCon, we're getting a a couple more GMs, we need to expand it. As I have been saying for a few years now. 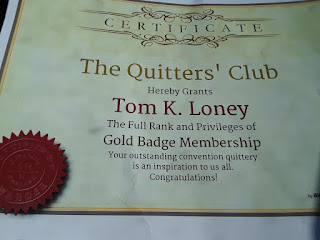