Romance Of the Reflective Racists

Okay Brit-heds it's time to get over yourselves. Again. Just like every nine months or so a movie about football needs to happen in the USA, every few years someone yet again tries to make role-playing in Arthurian England interesting. This is not a bad thing, as anybody that has watched the movie Jabberwocky knows, it can be a fulfilling two hours every decade. This is not a review of Scott Malthouse's Romance of the Perilous Land, this is a reaction to the kerfuffle around it.  Now by Brit-hed, I don't include, Werdna (my nickname for Scott), because he's more English than British. Heck he's more of a trans-Atlantic Breton than British. Sorry to out him among all you Anglo-Saxon wannabes with more Mediterranean genes in your blood than you'd like to admit, but it's time to just let it go. 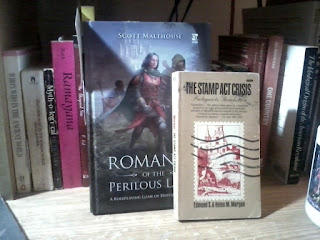 You know what? The Europeans, Yanks, and people from Mars already know that there probably weren't a lot of people of color in Arthurian legends. Somebody including a black guy on the cover to something that might or not be set in the Dark Ages is not re-writing history. It is more akin to trying to expand a market while old beardos and weirdos like you and me are busy getting older and developing dementia. If you don't want to be called "racists" then stop reacting to every time Martin Luther King Jr Day comes around in the States.

The book hadn't been on my short list of reading, as I am doing Star Trek of late, but now I promise I will get a review out about the book. After this weekend's convention should be a good time.
Posted by Tom K. at 3:41 PM