Star Track: the Right and the Left of Star Trek 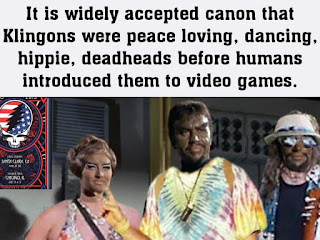 My current fixation on Star Trek as a gamer setting has me reading and watching a lot of ST content. The novels, the animated series, and the fandom articles or the 70s-80s. The Trekie phenomena material around the shows. A slough of fan-based lore about the universe. Plenty of "artistic critique" on each and every official thing with the words Star Trek attached to it. I'd have to say the vast majority of it, the good and the very bad, is well worth the effort. Even with the headaches I often get from the back and forth of the culture around the franchise(s) tends to be thought out and explained,there is no but to that.

Gamerwise, the takes on the universe of the ST shows and movies the political takes tend to be oversimplified by the people making the products though. The FASA RPG voice wanted to brush over the very liberal and whimsical tone of the TV series which it was based on, to get into the nuts and bolts of the organizational charts of Starfleet. To stress this, the authors fall into the trap of turning the narrative into something of a Horatio Hornblower style of setting. Readers are encouraged to learn how to play out their ST fanatsy characters by reading the fiction of somebody-another SF cadet to captain Sterling. there are more than a few passages where Fleet-Captain Garth is repeatedly praised as being something of a peaceful sort before he went all megalomaniac, genocidal, and then homicidal. The last bit of the character's story-arc never gets discussed. The latest take, the Modipheus one, kind of goes the other extreme, where its afraid to admit that 'Fleet is actually the military arm of the United Federation of Planets. This time the player is supposed be overwhelmed by the details of structure, while the GM gets to be too busy worrying about dice mechanics and wargame verbiage to worry about all that political stuff. Instead of talking about history, the writers do fan fiction done like White Wolf style NPC diary entries to provide atmosphere instead of boring old details.

Believe it or not, all that political stuff does make for a better game experience more so than focusing on crunchy rules and imaginary rank structures. Starfleet is indeed the rightwing's wet dream of military authority doing the correct thing for free and affluent populations against the powers working against those worlds' interests. Meanwhile the United Federation of Planets is indeed a transnational governmental organization that is looking for socialist-minded members, Vulcans and people from San Francisco, leaving the more capitalistic spacefarers, like the Ferengi or the Orions, to remain independent while it enfolds the space around them. To the space-travelers that are not in Starfleet ships or born on Federation planets, it kind of goes without saying that where the USS Whatever shows up the UFP is not far behind and there will be phasers shot complete with photon torpedo bombardments if necessary. This sort of detail with its potential for visceral drama should not be overlooked in a hobby called "role-playing"

Gamers are actually freed of the strict belief-systems encoded into strictly media-following fans of the ST universe(s). They don't have to say "this is not Star Trek" when their Jean-Luc Stewart PC rides in a dune buggy. The GM can bring in the Borg whenever they want. The players can get bored when their starship runs into its third master villain planning revenge on the Federation of Planets in as many missions. They can even say spoor drive is dumb and ask "why is she named 'Michael'?" Heck they can change their manly man's PC's name to Christy and dress up like Nurse Chapel and join the crew of La Sirena without being worried about whether its canon or not.

Upon scritpting up my Trouble in Tellarite Territory, I've been getting to play in the structure of the Star Trek universe but keeping it sub-canon. There are Tellarites and Gorn getting along before the dust up between the USS Enterprise and the Gorns has settled down. When troubling things start occurring on this styrofoam planet, I can go many ways not dealing in absolutes. I can go Milk Warp where it's say the Orion Syndicate causing the problems. Or I can also do Dark Trek where a faction of the Federation, or even a rather militant and nationalistic faction of Starfleet, is involved. If my players go gonzo. I'll just make it time traveling Spock or something so I am covered.

One as an adventure gamer or fantasist just has to remember that it's fantasy adventure.
Posted by Tom K. at 8:33 PM