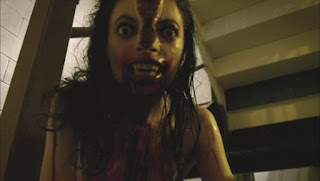 Tonight, I watched Hannah Fierman reprise her role as "Lily" from the "Amateur Night" short in the V/H/S movie from the Tweens, in a more recent movie called Siren. Just in case you heathens don't know who Lily is. She's a succubus demon that has a heart for romance that is bigger than her teeth or even her amazing eyes. Though it's not bigger than her tail or bat-wings for that matter. Definitely fell in love with her, sorry it just reminds me of when Peryton and I were dating-- I just can't get enough of soulless harpies in my life. It also reminded me of the type of horror role-playing that I like to do. Street-level folks in a sordid yet sometimes not dingy world where folks get a hands-on feel for the truly creepy supernatural things around them.

Even back in the RPG-Historic 80s, I was a bit over running into as a Player-Character either canned cheese (cultists or werewolves) or cosmic horrors that would squash everyone like a bug without knowing what was going on. So when I ran Call of Cthulhu, my players marveled at having played a mini-campaign where their jewel thief and gangster hit-man got to deal with a zombified rich man coming back for his beloved cursed jewel amulet. This lasted for three scenarios. The zombies family, a mob family, was getting torn to pieces, while the PCs had to put together what was going on. The players themselves were creeped out by the shadowy occult world they had to get into to find out what they needed to know. I introduced personal nightmares in the second session and they freaked out. This campaign would end and other short run tales would take its place with different groups in varying locations.

I'd keep my notes and the world had a pretty consistent feel to it. After watching The Lord of Illusion in '96 or so, I realized that other people had read Clive Barker's collection entitled Cabal. It'd also encourage me to keep my horror low magic but high grime.  During the later 90s and the Aughts, I got a bit off the mark. I worked CoC and Vampy: The Marketing Aid together to mixed results. My self titled "Cthulhu Round Midnight" series of scenarios for late-night sessions at GenCon from o5 until '11 or so, helped steady the ship.

Since then, I've gone pretty campy but can still turn on the chill in between laughs. So seeing Siren work "Amateur Night" into another chapter of street-level Lillith was a treat. Just need to get to some late night gaming slot somewhere these days where conventions are designed to sell Legos and autographs.
Posted by Tom K. at 2:50 AM